“Indonesian reporter Meutya Hafid and cameraman Budiyanto were abducted last week on a road from Jordan to Baghdad.

A member of the Committee of Muslim Scholars, Iraq’s leading Sunni organisation, also said the pair had been released.

“The two Indonesians have been freed and will be transferred to the headquarters of the committee in Baghdad, where they will have the choice of going to their embassy or leaving Iraq,” said the man, who was not named in news reports.

The video broadcast on the journalists’ own Indonesian TV channel, Metro TV, showed the captors saying: “We are going to release them without any condition. God is greatest.”

An official at the Indonesian embassy in Baghdad said they had been told of the journalists’ apparent release and were trying to establish their whereabouts. “ BBC News 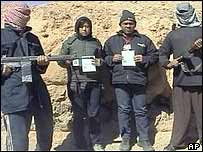 Another Sunday night in Jakarta. Rain has just stop. Me and Pii have just finished discussing about what is the best notebook specification that meet his requirement. He prefer to choose Fujitsu Lifebook P1070, i said it cost too much money, the screen is too small (for me). Got no more benefit except .. prestige, maybe. So i gave option on HP nc4010, Sony Vaio v505 series or Asus.

With a bowl of bakso, i start typing …

Couple hours ago, after finish watching Closer and Bride & Prejudice, i changed my tv channel to sctv. It’s a reality show called H2c on screen.

You know, when watching show like this, all i can think is i feel sorry for them. This episode telling about a girl who want to know the truth about rumour about her boyfriend cheating with another girl. (yikes, why that stupid girl has the same name as mine ?*@^(@^$)

ms. N has a boyfriend, mr.D. She heard rumour from her friend that mr. D is having an affair with ms.C. So, ms. C called H2c team to discover whether the news is right or not and put it in their tv show.

Bla bla bla bla, for you who has ever seen this show or might be addicted bout it, you know how the story goes. The team and “the boss” (ms. N in this case) spending couple days (a week maybe) stalking the target (mr. D) and monitoring almost all of his activities. As far as i could remember, ms. N called mr. D about where he is. mr. D said the he’s in his way with his friend, pick up foods his ordered before and bla bla bla bla.

In the end, ms. N cought mr.D and ms.C in the act. They’re going together to a restaurant with mr. D’s car. ms. C and H2C team also made their move. And what we get ? A fight between ms. N and ms. C, mr. D could’nt do anything much. Coz if you’re in the middle of a girld fight you’ll be came a cat between 2 elephants :P

OK, the girls keep shouting each other, exchange those “magic words” (you know what :P) and thank God they’re not scratching each other (mr. D will become and ant betwet 2 cats :P). The good part was, mr. D still have his head cool. He try to stop the fight (with funny ways :P) and one of his friend also helping to keep the ladies away for a moment.

The fact is, ms. C and ms. N has know each other for a long long time. I dont know but it seem that those 3 are friends from childhood. ms. C said she knew who ms. N is and her relation with mr. D although she’s not close with ms. N. mr. D is just a friend of her, person who she can talk with when she’s having problem and so on. Nothing more. mr. D say sorry for not mentioning ms. C name when ms. N called the other day. Coz if he did it, ms. C would be jealous and then went mad. Well, that dude maybe made a mistake, but he’s not lying anyway. ms. C is trully his friend. After bla bla bla bla, mr. D finally able to make the situation better. Those ladies sit together and talk (in normal intonation). ms. C and mr. D try to explain everything. She also try to call mr. N last saturday but she never answered. ms. C said sorry ’bout everything (mr. D also) but still, ms. N seemed not able to admit it.

Well, sometimes love is a very complicated. Isnt it ? Yes, if you think and make it so.
But in the other way, love is also a simple thing. It is, if you want it to.

The points are, if you had such a condition, what ms.N did was completely ba-ka. Why she exposed her self, her boyfriend, her friends (ms. C and the roumourmonger) to TV ? Phewww.

1st … she let people entire indonesia who whatch the show know what’s goin on between them. In context of getting attention, she got the point. But for me, anything personal should be handled by personal first. You can ask help from certain people, not exposing it widely to the public.

2nd … she let people in entire indonesia know what kind of girl she is. Over jealous, easy to manipulate, super egois etc etc etc. If she’s not an empty headed, she will realize that nothing good about her were exposed to public. Furthermore, all story about her boyfriend is completely incorrect. Just gossip.

3rd … did she think about the feeling of the people she just dragged into her problem ? No (look at point 2). Everyone (except the H2C team) will fill being emabrrassed or might be humiliated because of this. And if she (able to) think further, people on the street will start talking in her backr.

The last point, H2C got money maybe another credit in the show rating. People who watch will be laughing or just feeling sorry like me. She got nothing but shame..

Being over in many ways is not good.
Being over-possesive, over jealous … only humiliations we could get or the relation that we’ve tried to build so hard will end up with nothing.
Being over in loving someone, it will end up at least, like one row above :P
The worse is, if you’re using your emotion not in equal portion with your head …
You fell too much but you think less, or not at all. All you get is you’re the right one and the others are wrong.

For me, love is about trust between each other. Can you trust her/him and can you trust your self ?
If you could trust your selft but not her/him … you’ll get jealous with every people he/she talk to and has suspicions with everything he/she did.
If you could trust her/him but bot your self, you’ll become a cheater…
coz you never trust that you’ve found the one,
you’ll always try to search for another one
and never care anymore about the current one,
nor the previous one ….

Wait a minute, why it become a rhyme one one one ? :P

Well i used to write codes in languages that machines can understand, now i’m trying to write more in language that human can understand :P
Forgive me if there are so many syntax and semantic error :P
Hmmm, roti bakar ….. *yummy*
Ow, Manchester derby has just started

Full Moon Sway…
Gentle in the night of one fine day.
I was fool, couldn’t let myself to go.
Even for I feel…
The end.
Oh my fair…
Floating like a bird that’s in her wings.

Full moon sways…
Gentle in the night of one fine day.
On my way…
Looking for a moment with my dear.
Full moon waves.
Slowly in the surface of the lake.
You are there…
Smilling in my arms for all those years.

What a fool…
I don’t know about tomorrow…
What it’s like to be.
Ah~

I was sure,
couldn’t let myself to go.
Even thoght I feel…
The end.

Oh my fair…
FLoating like a bird that’s in her wings.
You are there…
Smiling in my arms for all those years.

What a fool…
I don’t know about tomorrow…
What it’s like to be.
Ah~

I was sure,
couldn’t let myself to go.
Even thoght I feel…
The end.

Full moon sways…
Gentle in the night of one fine day.
you are there.
Smiling in my arms for all thoses years…

taken from anime Beck (i am about to finish download the 17th episode)
sung by Maho-chan & Koyuki
just buy shonen magz and start read the manga :)